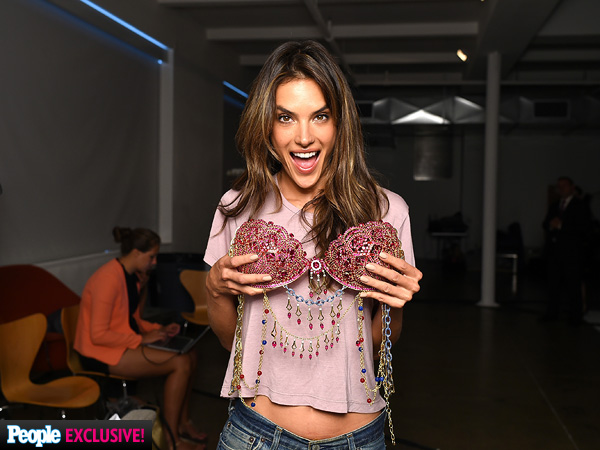 VS ANGELS HIT UP LONDON TOWN

When the signature piece in your blowout annual runway show is a bejeweled piece of lingerie called the “Fantasy Bra,” there’s always a major challenge and the question ‘can we top last year’s show?’ This year they had twice the challenge, after putting a $10 million bra on Candice Swanepoel last December.

The lingerie giant decided to double down on the challenge by creating two Fantasy Bras to be worn by two of its veteran Angels.

Both stars are no strangers to the concept of hitting the runway in a bra that requires its own security, having worn one in 2008 and 2010 (Adriana) and in 2012 (Alessandra). But this year the stakes were raised when the models, both 33, found out they’d be wearing mirror-image sapphire, ruby and diamond sets valued at $2 million apiece. Each lingerie set contains 16,000 perfect gems and is accompanied by 18-karat-gold-strung jeweled body pieces, all of which took more than 1,380 hours to create.

The show is usually held in N.Y.C., but this year, Victoria’s Secret is flying all the Angels to London for a new vibe. I cannot wait for this year’s show. I will be posting up more about the VS show soon. Who else will be modelling and who will be performing?

I am too excited!

🥂✨🥂 Just because a weekend of fluffy robe

A perfect weekend in the most beautiful hotel in C

Love you Kilkenny! 🤍 Planning a staycation in

That’s a wrap! 💫 I showcased lots of sequin

When you find one of the most beautiful waterfalls

Another day, another waterfall…! 🤍 Just beca

48 HOURS IN WICKLOW! 🤍 A dreamy weekend away i

That’s a wrap! 💫 I showcased lots of winter

Wednesday Addams but with blonde hair, a smile and