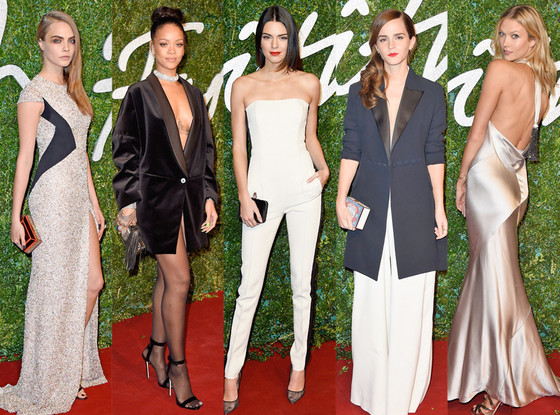 The entire night read like a “who’s who?” of the British fashion world, with some of the biggest models and designers, from both the UK and abroad, showing up to the awards, including Emma Watson, Harry Styles, Victoria Beckham, Cara Delevingne and Naomi Campbell.

Stylish Boys Are Always A Bonus

It was nice to see some of the showbiz men in attendance making a bit more of an effort than a simple tuxedo. Harry Styles went for a striped suit, while Henry Holland posed for photographers in a green coat with blue glittering detail.

The Brave Risk It On The Carpet

There was a good few risks taken on the red carpet too with Twiggy proving you’re never too old to push the fashion envelope by showing up in a suit, and Alexa Chung strutting her stuff on the red carpet, holding what looked like a Chinese takeaway bag as a handbag.

Rihanna wore a velvet coat and… well, some shoes. Simple yet effective. If it works…it works!

See below for more of my favourite red carpet looks! <3

Bear Grylls who? 🐻 Just because a night in the

The last of the birthday antics! ☀️ Turning 2

When you find out rhubarb margaritas are on the me

When the sun comes out!☀️😋 If you haven’

Sun out! Dress out! ☀️ An Easter weekend well

That’s a wrap! 🎬 Heading to the races this S

Howth! 🤍 This will forever be one of my favour

That’s a wrap! 🎬 Are you planning a city bre