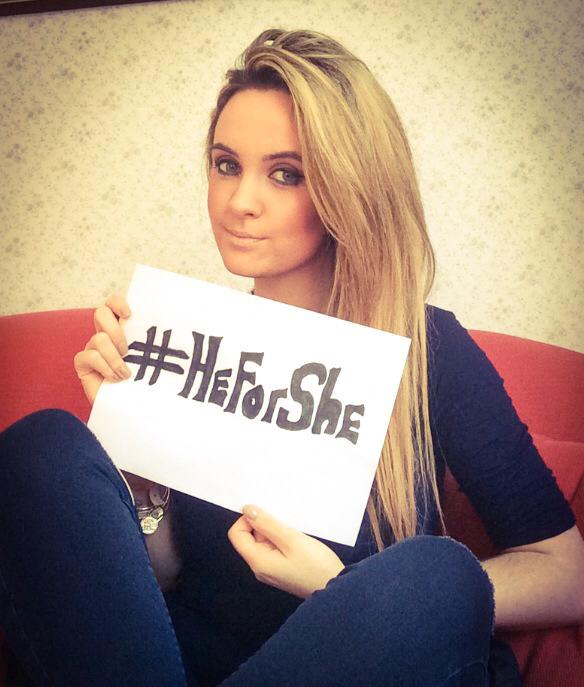 Emma Watson: Gender equality is your issue too

It’s official: There’s literally nothing Emma Watson can’t do. She is an in-demand actress, an insanely smart college grad, and general life hero and of course she is the UN Goodwill Ambassador. Many people have had an impact on my life, but Emma Watson is by far at the top of my list. She’s my inspiration and I have the utmost respect for her.

As most of you already know, she launched the HeForShe campaign at the UN on the 20th of September this year and extended a “formal invitation” to men to participate in the conversation about gender equality. “Gender equality is your issue too,”said the actor.

As completely UNACCEPTABLE as it is, men STILL wield power over women. That is the critical point. We should also not ignore other issues: white wields power over black. Straight wields power over queer. Rich wields power over poor. Feminism is about addressing the power imbalances that limit people’s opportunities to live their lives to the fullest. We need men to join the feminist pursuit of social justice because it is the right thing to do. It isa matter of Human Rights.

On the official website a map shows how many men have pledged their support to raise awareness about gender inequality, men who also pledge to take action against the discrimination of women.  Famous figures and celebrities including U.S. President Barack Obama and actors Matt Damon, Forest Whitaker, and Joseph Gordon Levitt are only a few of the 190,000 men that have taken the pledge.

Does it make a difference if thousands of men all over the globe take a pledge to combat violence against women and support gender equity? Yes it should.  This campaign should work to encourage more conversations by men about feminism.  An equality issue that plagues over 50% of the world’s population can’t only be fought by half of the world’s citizens. Emma Watson stated: “No country in the world can yet say they have achieved gender equality”.  This statement alone should inspire both men and women alike to tackle the sexism that we face each and every day.

Have conversations about how media and pop culture reduce women to their body parts and as sexual objects?  Let someone know what the real implications of sexist language are, even targeting comments as minor as “man up” and “stop acting like a girl”.  Once you are aware of the presence of sexism in our global society, you can take small small but productive steps to make a difference. Emma’s work so far with this campaign and those who support it is inspiring.  Hopefully a result of more men and women being concerned with feminism is achieved.

The Petition & The Movement

The initiative essentially involves a petition that men are invited to sign, committing themselves to “take action against all forms of violence and discrimination faced by women and girls”. However, a movement is more than a petition.

To all those who were inspired by Emma’s speech, men and women alike, it’s time to make a difference.

If you haven’t already seen Emma’s empowering speech check out the video here:

Do you agree? #TakeAction

If so, click here for more information on how you can get involved.

Gender equality is not only a women’s issue, it is a human rights issue that requires your participation. Commit to take action against all forms of violence and discrimination faced by women and girls.

Your donations will provide:

I hope you will all take something away from this blog post. We can all make changes by taking small steps, being persistant and uniting!

🥂✨🥂 Just because a weekend of fluffy robe

A perfect weekend in the most beautiful hotel in C

Love you Kilkenny! 🤍 Planning a staycation in

That’s a wrap! 💫 I showcased lots of sequin

When you find one of the most beautiful waterfalls

Another day, another waterfall…! 🤍 Just beca

48 HOURS IN WICKLOW! 🤍 A dreamy weekend away i

That’s a wrap! 💫 I showcased lots of winter

Wednesday Addams but with blonde hair, a smile and