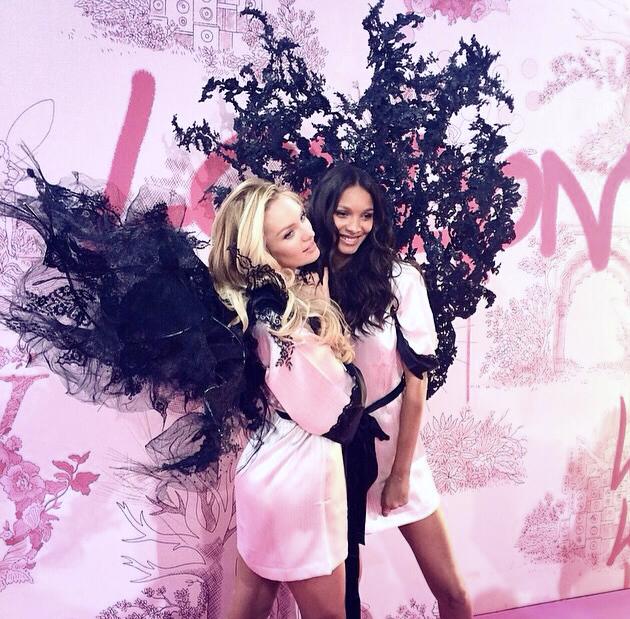 THE ANGELS TAKE OVER LONDON

This year’s themes included Gilded Angels, Exotic Traveler, Dream Girl, Fairy Tale, Angel Ball & University of Pink. The angels looked stunning in their selection of lingerie, wings, jewels, accessories and clothing. Adriana Lima and Alessandra Ambrosio got the Fantasy Bra honors, showing off a pair of (to die for) jewel-encrusted brassieres valued at $2 million each.

The opening theme of the show featured the gold goddesses in metallic wings, boots and corsets. This was one of my favourite themes. Sparkles, confetti and gold gold gold! Click here to shop the theme.

The next part of the show featured a lot of red. There was capes, feathers, mini-jackets and of course Adriana Lima & Alessandra Ambrosio walked the catwalk in their Fantasy Bras (probably the two most highly guarded bras in the world). The lovable Ed Sheeran performed “Thinking Out Loud” as brilliantly as always during this set. Click here to shop the theme.

The next set featured fun, flirty, seductive and sexy looks. This included everything from chiffon robes to ribbons and lace to faux-fur pom-poms on the angels heels to seductive stockings. Taylor Swift performed “Blank Space” during this set. Click here to shop the theme.

“Get swept away by flowing frocks, ethereal creation in earthy tones topped with iridescent details”

This was definitely another one of my favourite themes. There was butterfly and leaf wings, flowers, glitter, blues, golds and pastels. I loved it all. Hozier #GoIrishAgain performed “Take Me to Church”. Click here to shop the theme.

This set was the Victoria’s Secret PINK section, it was bright, sporty, fun and colourful with crop tops, waistbands and over-the-knee socks.Ariana Grande performed a “Bang Bang”. Click here to shop the theme.

Taylor Swift, Ariana Grande, Ed Sheeran and Hozier performed on the runway during the show, got into the spirit of the event, coordinating for a major number with Angels clad in various lingerie ensembles.

Swift had both good-girl and bad-girl looks, rocking a long, light pink satin robe with black lace trim over a short matching nightie before changing into a black bra top and panties

Grande needed nothing but a flirty half skirt — the back half — when she rocked the sparkling black outfit with over-the-knee boots.

The Ed Sheeran and Hozier without a doubt looked the part too.

As you can imagine, an INSANE amount of people were involved in the organisation, promotion, advertising, production and overall coordination of the show. Twenty-five makeup artists, 25 hairstylists and nine manicurists were required to prep the models.

The angels boarded a private jet early Sunday from New York’s JFK airport to London Stansted Airport. As soon as the angles landed in London town they made a surprise appearance at the new VS store on Bond Street. They wore fitted jeans, VS-branded T-shirts and black leather jackets.

So much hype so little time!